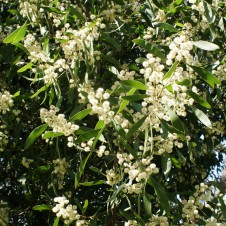 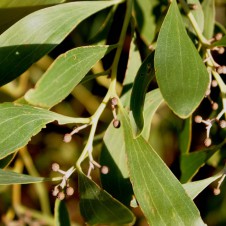 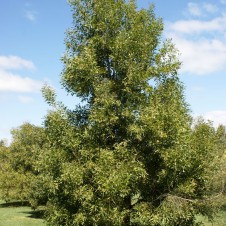 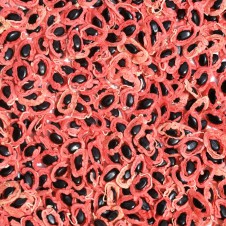 General Description: Varies from a small to large tree, 6-30 meters high with a dense, dark green crown. In open situations it is a small to medium tree with branches low to the ground. Tall trees with a well developed trunk occur in cooler, moist areas on deep soils. Bark is dark grey-brown, hard and furrowed. Juvenile foliage is bipinnate while adult foliage is broadest in the centre and narrow at both ends and slightly sickle-shaped.

Flowers and Fruit: Three to five, pale yellow, honey scented, round heads occur on almost hairless stalks in a simple arrangement along a main stalk. Flowers from August to October.
The fruit are pale brown pods which become twisted or coiled when ripe. Seeds are surrounded and attached to the pods by a pink-red funicle encircling seeds twice.

Site Preference and Tolerances: Grows best in moist, well drained soils with cool climatic conditions on good quality forest soil and alluvial soil. Will grow on a variety of sites including basalt plains, lowland swampy areas, higher hill slopes and exposed mountain tops. These trees are cold hardy, wind firm and generally frost tolerant. Young plants are fast growing and very tolerant of shade. These trees are comparatively resistant of fire and this is one of the first species to reappear after forest clearing or burning. It is resistant to insect attack and suckers readily if roots are damaged

Wildlife Value: Attracts parrots, native pigeons and other seed eating birds. The furrows and cracks of the trunk bark are inhabited by many insects and spiders. It is a butterfly food plant because it provides food for caterpillars of Blue Jewel, Common Imperial Blue, Grampians Hairstreak and Silky Hairstreak. Its flowers attract pollen feeding moths, butterflies and other insects. Ants will collect the seed to feed on the funicle.

Other Values and Uses: Timber is golden-brown to darker brown, sometimes with reddish tint or streaks with distinct growth rings. Tough, hard and close grained this is one of the most decorative of Australian timbers when polished.
Blackwood is useful for erosion control due to its vigorous root system and as a legume it provides nitrogen to the soil and the foliage is palatable to stock. The trunk is resistant to debarking and so this is an excellent paddock tree. The bark has good tanning qualities and the leaves can be used for dyeing.
Dense stands can make excellent Shelterbelts and the wood makes good fuel.
Aboriginal Uses include heating the bark over a fire then infusing in bathing water as a treatment for rheumatism. Clubs, shields and spear-throwers were made from the wood and the plant contains an edible gum. Fibre from the inner bark was used for making fishing line and parts of the plant were used as a fish poison