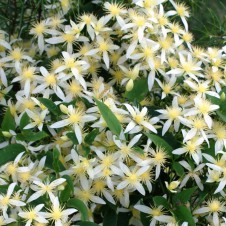 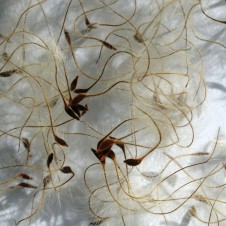 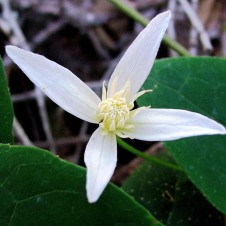 General Description: Vigorous forest climber which can ascend to the upper storey canopy, to 15m high, with dark green foliage and large, cream-coloured flowers. Juvenile leaves have white markings above and are purple below.

Wildlife Value: This is a very attractive and interesting plant which provides habitat for birds when it twines over branches. The feathery awn is used by birds for nest lining and the seed is a great food for seed eating birds.

Other Values and Uses: This is a very showy climber with sweetly scented star-like flowers. It will grow well under established eucalypts if watered during summer. It is useful for screening when supported. Roots were cooked in baskets by aboriginal people and pounded and kneaded into dough.

Germination Information: Fresh seed has good results in one to three months. Light will give increased germination so only cover lightly with soil. Time to germinate increases as the seed gets older and seed more than 12 months old can be difficult to grow. We collect seed for this species every year and do not sell seed from previous years (we spread the older seed in our seed production area).