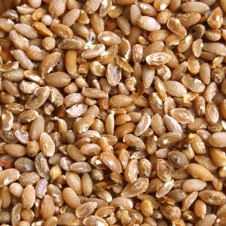 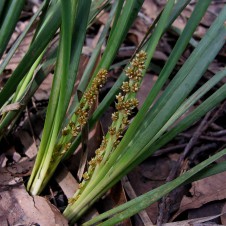 Flowers and Fruit: Male and female flowers similar, small, creamy, sweetly perfumed and in spikes, from September to February.

Fruit forms only on the female plants and is a cluster of round, brown, shiny, capsules, each containing 2 or 3 seeds.

Site Preference and Tolerances: Found in a variety of woodlands and forests throughout Victoria. Common along streams. Prefers rocky, well drained soils but often occurs on broad swampy creek-flats. Tolerant of frosts and drought and mildly salt tolerant, prefers half sun to shady conditions and dry to waterlogged soils.

Other Values and Uses: Vary hardy and useful in floral arrangements. Excellent for steam-side erosion control because of its matting root system. This very attractive strap-leaved plant is becoming more commonly used in both public and private landscapes. The creamy flowers are faintly scented.

Aborigines used the leaves for basket making and they were also woven into bags and mats. Leaves were collected and split in two and then left to dry for at least three days. They were then re-wetted for 24 hours to make them pliable.

Germination Information: This species is difficult to grow and germination can be improved by soaking seed for at least 24 hours first and sowing them in autumn, it can still take from 8 to 10 weeks.